It had been 2 weeks since my last big walk and I’d been itching to find a suitable day to get back out on the hills again.  I wanted to be a strange girl on the plain again, wondering the moors, crossing the glens and scrambling through forests.  I wanted to be alone again in the beautiful rambling wilderness of South-west Scotland, where the worries and stresses of everyday life were insignificant and forgotten about for a few happy hours.

The weather forecast had promised 0% chance of precipitation all day, but in reality it was raining when I set off from the top of Furnace Road in Muirkirk at exactly 9.30 am.  But this bothered me very little since the soft, almost summery rainfall and the bright morning sunshine created a stunning rainbow which accompanied me for the whole of the first hour of the walk.

At 10 am I came to a point where the path forked and the little signs on the posts both said the same thing.  In the end I opted for the right-hand path which lead over a sturdy metal bridge across Garpel Water and up a steady hill.  It was here from the higher vantage point when I realised that it wouldn’t have mattered which path I had taken as they both lead to the same point.  By 10.30 I reached Bert Bradford’s bench and stopped to appreciate the view back down to Muirkirk – even though I had only been walking for an hour, it seemed like I had traveled quite a distance.  The rain had stopped and the sun was still shining and all was good.

Despite the sunshine, the ground underfoot was frozen which actually proved to be a huge benefit.  For the next hour the terrain all around me was incredibly boggy, but I found that as long as I kept my pace fast and my footsteps light then I could skip across the muddy marshland without cracking the surface of the frozen mud – on the lower ground at least.  By the time I reached the higher moorland it became really quite soggy and the path through the water-logged terrain became virtually non-existent.  It was so much fun plotting my way across the uneven land, leaping onto the higher mossy patches and dodging the deep murky pools. Every now and again hidden flocks of European Golden Plovers would suddenly rush up into the air, filling the air with their beautiful call.

By midday I was a bit disorientated but I continued onward towards the golden hills, still unsure if I was on a footpath or just a sheep track, until I saw the welcoming sight of the forest.  I knew part of this walk cut through the forest on Drummond’s Knowe and I felt sure (but still not certain) that I was in the right place (I will buy an OS map at some point because I’m starting to realise that maps aren’t just pretty things to stitch – they are actually quite a useful thing to have when you’re wandering the hills on your own).

The next part of the walk should have taken me no more than 15 minutes but, partly because of the aforementioned issue of not having a map, it ended up taking me an extra hour.  Being in the forest was such a fun contrast to traipsing across sodden moorland so I spent half an hour climbing huge fallen tree trunks and bouncing on the springiest mossy mounds and just being a big kid.  I could hear the sound of heavy rain at this point, but the forest was dense enough to keep me dry, hence the reason I lingered for longer than I perhaps should have done.

It was when I left the forest that I made my little error.  Instead of continuing straight forwards, for some reason – I think a fallen tree obscured the correct path – I ended up following a dirt track on the left, through a great stretch of desolate harvested forest land and up Stony Hill.  I continued up and up, climbing over huge felled tree trunks and leaping across deep water-filled pits, with the realisation slowly dawning on me that I was perhaps not on the right path.  To make matters worse, at this point the sky decided to treat me to a combination of rain, sleet and hail all at the same time, although by this point I was boiling from my manic stomp up the hill so it didn’t really matter – I just felt glad that I had put contact lenses in rather than worn my glasses! 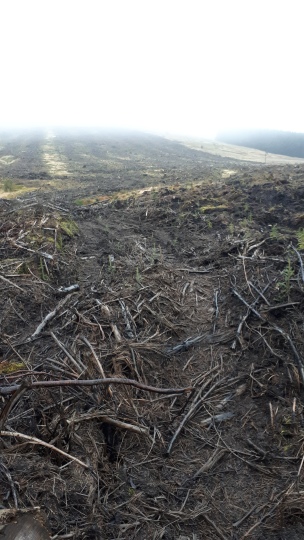 After eventually finding the path again, all of a sudden it spat me out of the forest and onto a proper track.  Initially I turned right and continued down for 5 minutes until I spotted the very welcome sight of a signpost pointing me back the other way and informing me that I was 7 miles from Sanquhar.  This meant that I had supposedly only walked 5 miles, although since I had been walking for nearly 4 hours by this point, I felt sure that the sign either couldn’t be right or I had just gone off track more than I realised.

The next part of the journey was perhaps my most favorite bit of the whole walk.  By 2 pm the forest was behind me and I found myself on the beautiful old drove road across the moors, passing Mount Stuart and the wonderfully-named Knockenshag on my left.  The sun shone brightly in the patchy blue sky and I found interesting spots to stop to rest and appreciate the view.  I spent some time in a little quarry where the air was so still I could hear the cracking sound of the frozen puddles around me slowly thawing out.  Occasionally icicles and frozen clods of earth would break free and tumble down the quarry face making a satisfying echoing sound.  This place had a calm, yet slightly eerie vibe to it – I think it reminded me of college years spent in disused quarries around Buxton and I know I will happily while away a sunny summer afternoon or two in the future here.

It was 3 pm by the time the track lead me down to Fingland and the light was beginning to fade.  Here I had 3 options: head to Wanlockhead (an utter fool’s mission with 10 miles to cover and only an hour of daylight), carry straight on for 5 miles to Sanquhar or cut over the hills for 3 miles down to Kirkland, which lies just up the road from Rigg House.  Naturally I opted for the latter route – by the time I had passed Low Knypes on the right and joined the path up Glenaylmer Craig I knew I was less than an hour away from civilization and not far from home.  I descended Little Kirkland Hill, watching scores of hares bounding through the long grass and I felt that slightly mixed feeling I always feel at the end of an adventure – a sense of relief to be heading back home to my family and a sort of melancholy about leaving the wilderness.  I’ll just have to get planning my next trek through the beauty of South-west Scotland.