For as long as I can remember I have spent every New Year’s Day indoors, hungover and not setting a foot outside for the entire day.  This year I wanted to do things differently so instead of spending 24 hours under a duvet eating biscuits, at 6.45 am I slipped out of the house and set off on an adventure.

It was still as dark as night at that time and the clear black sky was studded with twinkling stars, which was an unexpected treat.  As I made my way down the road towards the forestry track opposite Guildhall Bridge, a bright ‘fingernail’ moon illuminated my route in the still and peaceful atmosphere.  My phone told me it was only 5 degrees – but with no wind in the air, it wasn’t at all cold.  It was a good way to start a walk.

I reached the little quarries on Mynwhirr Hill at 7.55 am, which was a full 30 minutes faster than when I did this same walk a couple of weeks ago (although last time I did start from a different location which joined up with this route about a mile in).  My first goal for this adventure was to reach one of the wind farms in time for the first sunrise of 2019 which would happen at 8.44 am so I knew I couldn’t dawdle – although I did stop briefly to enjoy the first of the 4 mince pies which fueled my walk!  Just at the point where the track dips down towards the forest I was treated to the sight of two deer bounding past me and racing up the hill, shortly followed by a huge hare.  I had hoped that this would by the first of many 4-legged creatures I would spot on the walk, but unfortunately these turned out to be the only ones I saw that day. 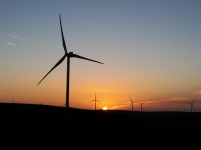 My rough calculations proved to be spot on and I arrived at the point between Carcarse East and Mid Hill at exactly 8.35 am.  I was so happy to be back with the wind turbines again!  I raced up Mid Hill on my left, past T9 turbine and over the gate to the spot looking out over Bank Hill and here I watched as the sun started peaking up from behind the hill.  It was beautiful.

An hour after sunrise I reached the ruins of Euchan Cottage where I treated myself to another mince pie and a little rest (after a very boggy trek across marshland to get to the ruin).  At 10.40 am I came to another little quarry where I stopped to eat something other than mince pies.  I was now in unfamiliar territory as I had made it further than I got to last time, but I knew that as long as I didn’t deviate from the main track then I would be fine.  My next goal was to reach Polskeoch Bothy by midday and, since I was making good time, I felt positive that I was going to make it.

And I was right!  At 11.45 am, exactly 5 hours from when I left home, I arrived at the bothy.  I wasn’t expecting it to suddenly appear when it did so it was quite exciting when I came to a Southern Upland Way signpost, turned a corner and there it was.  I have never been to a bothy before – in fact I’d never even heard of them before moving to Scotland in 2017 – so I was very happy to have ticked off a goal for 2019 on the very first day of the year. 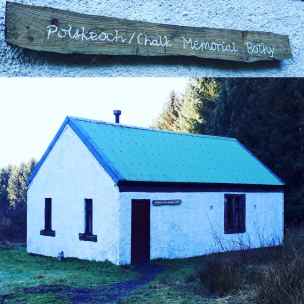 The building was slightly bigger than I expected and was furnished with a comfy 2 seater-sofa, 2 armchairs, assorted plastic office-type chairs and a couple of tables.  At the back was a sleeping platform, sort of like a little stage you’d find in a village hall.  And to my surprise there was even cute little stove (which I found out had only been installed last August), complete with a nice stash of firelighters, kindling and logs.  Within 10 minutes of stepping inside the bothy I had a roaring fire going and was very happily curled up on the sofa, drying out my slightly damp socks and reading the guest book (my favourite quote from it, written on June 17th 2018; “midges are now holding us hostage“).  I hadn’t really anticipated the bothy being quite as wonderful and cosy as it was so I hadn’t planned on spending as long as I did there, but I’m glad I did…and I can’t wait to return.

Whilst in the bothy I learnt that the name ‘Polskeoch ‘ comes from the Scots ‘Poll Sgitheach’.  This translates as ‘the pool beside the hawthorn thicket’, which reminded me of the translation for the name of the town I grew up in, Ashbourne, which originally meant ‘village by the water where the ash trees grow’.  Polskeoch Bothy is also named the ‘Chalk Memorial Bothy’, and I learnt from the guest book that the building was erected in honor of Henry and Shirley Chalk after their ‘sudden deaths’.  I am hoping to find more about this couple and their connection with the area so if anyone reading this has any information then please get in touch.

At 1 pm I wrenched myself away from the warm comfort of the bothy and retraced my steps back up the incline.  I couldn’t really bear the thought of walking back on myself the entire route, so instead I veered off the track, cutting out a large corner of the track, and scrambled up the steep slope of Polskeoch Burn.  Despite the seemingly never-ending mission up the burn,  I actually managed to shave 30 minutes off my time so I still felt confident that if I didn’t take too many breaks then I could make it back home before dark.  It was ten past two by the time I made it out of the forest and back onto the track between Ryegrain Rig and Corse Hill so I stopped to catch my breath and basked in the warm, bright afternoon sun.  I had a feeling that I was really close to Polvaird Loch at this point – and although it turned out that I was correct, unfortunately I didn’t have enough time for another adventure that day. 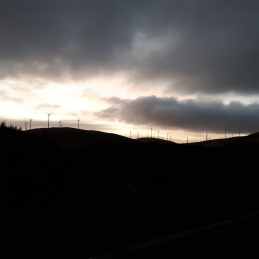 Just before 3.30 pm, I was back at the wind turbines, at the point where I had watched the sunrise a few hours earlier.  By now my feet were really starting to hurt and although it was mostly down-hill from this point, each step became more and more hard going.  By 4.20 it was beginning to get dark – I knew I still had over an hour to go but I wasn’t really enjoying myself anymore so I caved in and rang my other half for a lift.  I know it was a bit of a cop out to bail on the final stretch but I think I ruined it for myself when I started focusing on how much I wanted a cup of tea!

In the end I managed to cover just over 20 miles in 7 hours of walking (not including my many breaks) but there is still so much more up in the forest that I want to see.  Next time I’m going to attempt a bike mission and see how far I can get – I’m not so confident of my cycling prowess when it comes to ascending lots of hills so that will be an interesting adventure!