Descant on Nature and her laws,

Charm rocks, and trees, and waterfa’s,

A couple of miles out of Sanquhar, just beyond the ‘back road’ lies one of the most magical places I have visited on my Upper Nithsdale adventures; the Pamphy Linns.  It was Rev. Simpson’s description of the Pamphy Linns (waterfalls) in Traditions of the Covenanters which made me want to visit this hidden beauty spot.  It sounded like my sort of place.

It is a very striking scene; and so little indication is there of the existence of such a fairy nook, that no person in passing through the heathy tracks in its close vicinity could ever imagine that any thing remarkable was to be met with.  And yet there is hidden below the
general level of the mossy plain a spot of real Enchantment; or some of the finest points of Scottish Scenery, as a celebrated writer remarks, escape the eye of the passing traveller.

From Sanquhar I headed across the Blackaddie Bridge, straight up the Barr Road continuing up for about 30 minutes.  Just after reaching the Old Barr Farm, I climbed a wall on the right into a young tree plantation.  Over the wall on my left, cows and sheep watched me with suspicious eyes.  I always try to explain to them that I am Friend o’animals and I wasn’t intending on eating them any time soon (ever) but they never seem to believe me.  I get so offended when sheep won’t pose for photos and just manically sprint off, acting like gazelles being hunted by lions.

The old plantation, where the burn and its linns run through, lies up to the left.  I opted to walk around the perimeter of the plantation to figure out the lay of the land.  Of course, just as Simpson had recorded, any sign of the linns, or the burn, were indeed hidden, even from my elevated position in the field.

Eventually I reached a fairly sturdy stile leading into the woods which seemed like a sensible way to enter the pine labyrinth.  It was clear there had once been a footpath through the trees, but one that no human seemed to have walked for a long time.  I cleared the path to the right as best I could and made a couple of hundred yards passable once more, before carefully descending down towards where the burn ran. 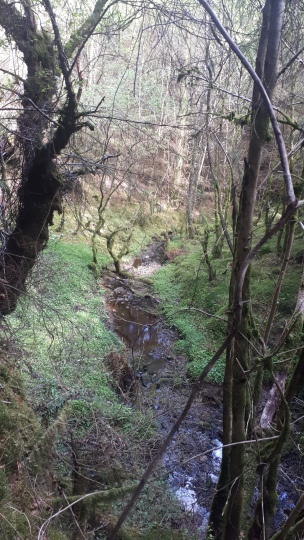 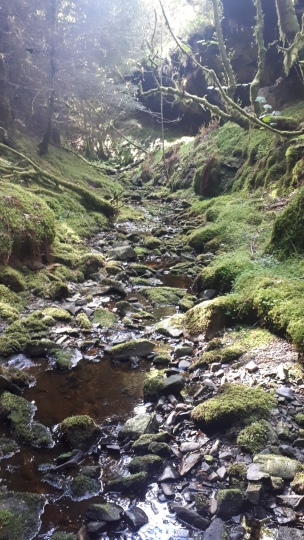 Then farther up we took a tour,

To view the lovers’ birken bower,

Where oft they spend a happy hour,

I could try to explain what beautiful sight lay before me, but I really don’t think my words can do this place justice, ditto my photos.  The best way to describe it is that I really felt like I was on the set of a new Jurassic Park film; it would have surprised me not one bit if a pterodactyl had flown overhead or a brontosaurus had bobbed past.  It was freaking wonderful. 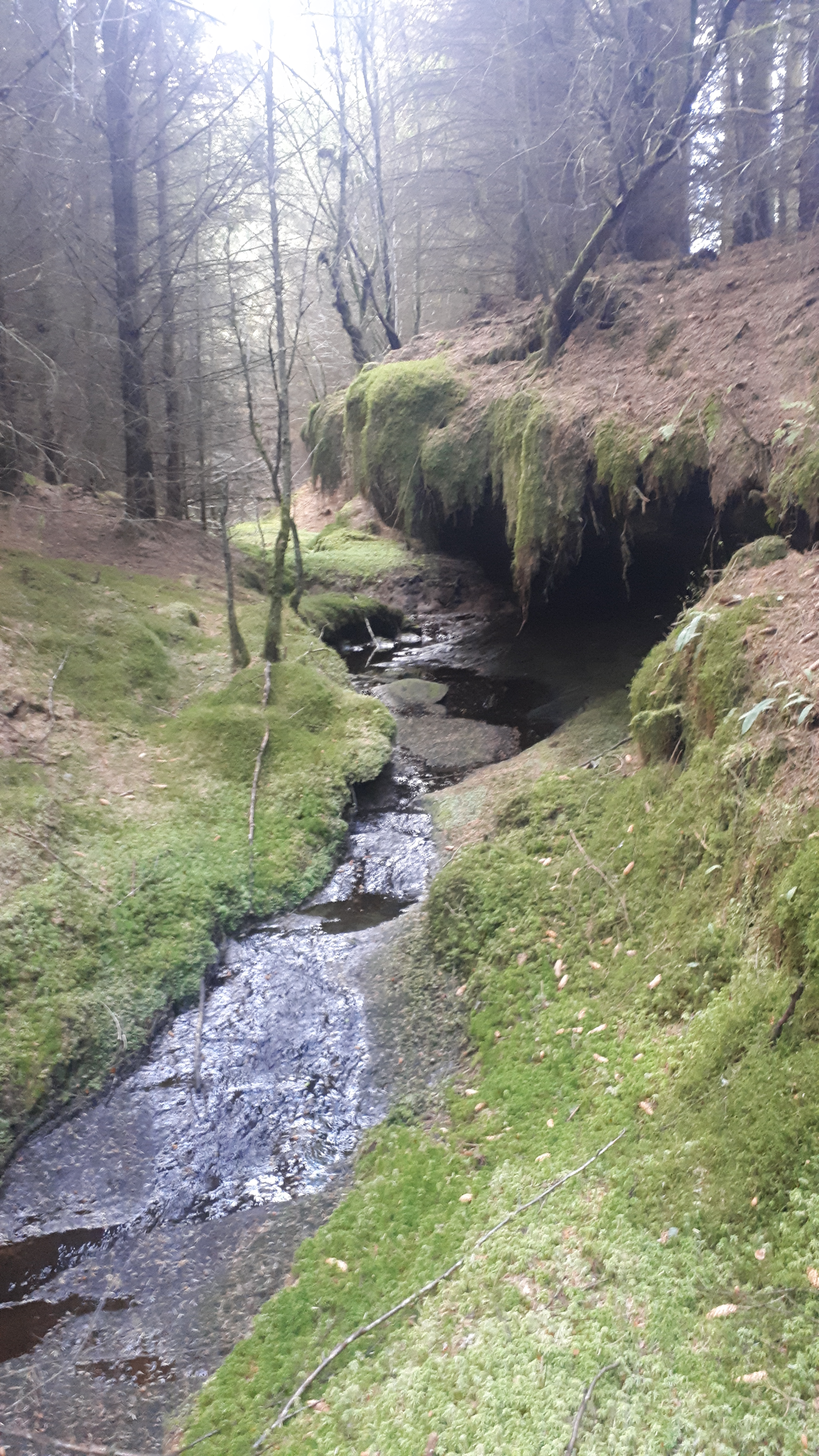 Huge rocks with moss half-cover’d dipt
Or in the stream reclined,
As if they once had partly stript
To bathe, but changed their mind.

In Traditions of the Covenanters, Rev. Simpson does a perfect job of detailing the geography of this wee spot:

Two gurgling streamlets that issue in crystal purity from the hills in the background, meet together, and immediately above the point of their junction, they have worn their troubled channel to a great depth, and by the erosion of their waters have formed spacious cavities in the sandy rocks that rear themselves to a great height on each bank…On the other part of the linn, where the torrent rushes down a craggy declivity of great height, the rocks are so fearfully excavated as to shoot far over-head in a horizontal position, threatening an instant fall and apparently upheld by nothing but the hand of Omnipotence. These gloomy excavations have been formed in ages long gone by, and in one place the rivulet seems to have been almost wholly arched over, forming an immense cauldron of dark and deep waters, boiling and eddying in the profound beneath. The super-incumbent mass has in some places tumbled down and is lying in scattered fragments like the broken arches and colonnades of some magnificent temple. A place like this, even among the splendid scenery of the mountains could not pass without admiration, but when it is met with in the heart of an uninteresting Moor, it is like an oasis in the desert.”

After an hour of exploring this certifiable Wonderland, reluctantly I knew I had to head back home to return to the accepted version of reality.  I headed back up a slightly different way and there I found the thing I had most hoped to find on this adventure.  On the other side of the large rock between the two burns you can find the spot which completely and utterly made me feel like Indiana Jones.  In fact, Spielberg really needs to do a new Indiana Jones movie based on the Covenanters.  Imagine that!  It would undoubtedly be better than that ridiculous alien one which we all try not to think about.  Harrison Ford is most welcome to come and stay at Rigg House B&B when they make Indiana Jones and the Revenage of the Covenanters, not a problem at all.

The Pamphy Linns was once used as a shelter bythe Covenanters; their presence of which I most certainly could feel when I was under the ‘caves’.  It was perhaps not the best long-term hide out for them, due to the location of the dragoons’ post at Eliock House not too far away, but it offered adequate shelter from storms.  I had read about carvings in the rocks at Pamphy Linns and I wondered; could they possibly be carvings by Covenanters?

Perhaps these caves, in times of need,

On moors and linns.

The names of those now mixed with clay,

Some emigrated far away

It was pretty exciting finding the carvings, although I imagined there were once perhaps more of them here – the remaining ones that I could find were almost completely faded, the letters shedding from the rock face as a result of centuries of erosion.  I could make out an ‘I.R’, an ‘M.L’ and a ‘T.R.C’, amongst a few other letters.  In Duncan Close’s booklet Walks around Sanquhar, he mentioned one of the initials here as being carved by Walter Chisholm, a shepherd in Barr, who died in 1830.  I did indeed find a ‘W.C’ carving, but it was another one close to this one which really caught my attention.  This one, quite faintly, but almost certainly seemed to read as ‘1706’.  I held my breath and traced my finger along the digets. Was this carving, hidden down in a mossy glen, really over 300 years old? 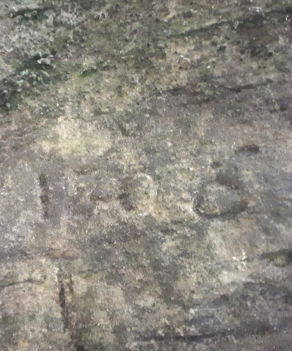 The Pamphy Linns was a difficult place to leave.  I was under it’s spell.  For indulgent moments it felt like I was the first human to have set foot on those rocks for a hundred years, like the whole little glen had been cloaked under a spell of it’s own casting, and my crossing the stile had awoken it once more.  But leave I had to, but with the certainty of returning before the month was out.  There is so much more to explore and discover down here.

But ere we turn’d our path to trace,
I cried, “Farewell, thou stream!
If poets are a dreaming race,
Then here they well might dream.

Then out at last into the fields,
Tinged with the daisy’s dyes;
Dear heart! I said, but nature yields
A bliss the town denies.