For the past few months I have spent nearly every evening working on my exciting project: creating an Upper Nithsdale Poetry Trail – a walking route which takes in lots of the wonderful locations written about by local poets throughout the last couple of hundred years or so.  It is proving to be a wonderfully exciting journey of research – so much so that I am now planning not just one route, but 4 or 5 different routes which all begin in Upper Nithsdale.  The end goal will be to either have printed maps and boards with the poems on, sited at the locations they are about, or maybe just a website with the poems and routes on.

The idea for a poetry trail began by purchasing a book of poems by the most well-known Kirkconnel poet, Alexander Anderson (‘A Song of Labour, and other poems’) and I think I initially expected the route to consist of just Anderson’s poems.  But as my research expanded I ‘discovered’ a wealth of wonderful poetry written by a host of other poets ranging from poems written in the early 1800’s, up to ones from this century, and all written specifically about the hills, burns and historic locations of Upper Nithsdale.

Because of my interest in the history of the Covenanters, I was excited to find a book – ‘Poets and Poetry of the Covenant’ – which contains over 50 poems all about the Covenanters.  This book, published in 1894 and complied by the Rev. David McAllister, proved to be the perfect resource which lead me to begin thinking about devising a Covenanter-focused poetry trail; one which would not only share this haunting poetry, but would also educate visitors about the history of the area.  Most of these poems were too epic to be mixed in with more gentler ‘scenic’ poems I had found elsewhere, hence the reason why I decided to have a separate trail focusing only on Covenanter poems.  I soon realised that I had collected too many poems for just one Covenanter route so I now have a North and a South route, both of which are about 30 miles long and both which lead us through 15 poems each.

Today I want to share the first of the Upper Nithsdale Poetry Trails which I have provisionally mapped out – I haven’t yet had the chance to walk the entire length from end to end in one day (just parts of it on other walks), but I plan to rectify this as soon as possible!  I imagine that the route may possibly alter slightly before I begin properly publicising all the trails, so this is sort of a ‘work in progress’ with just a small description of each location and a snippet from each of the poems.  For now I am just sharing the first half of this route as it is a pretty long one!

All the routes will be named after birds – the one I’m detailing a part of below is the ‘Curlew Trail’ – The Upper Nithsdale Covenanter Poetry Trail (north). 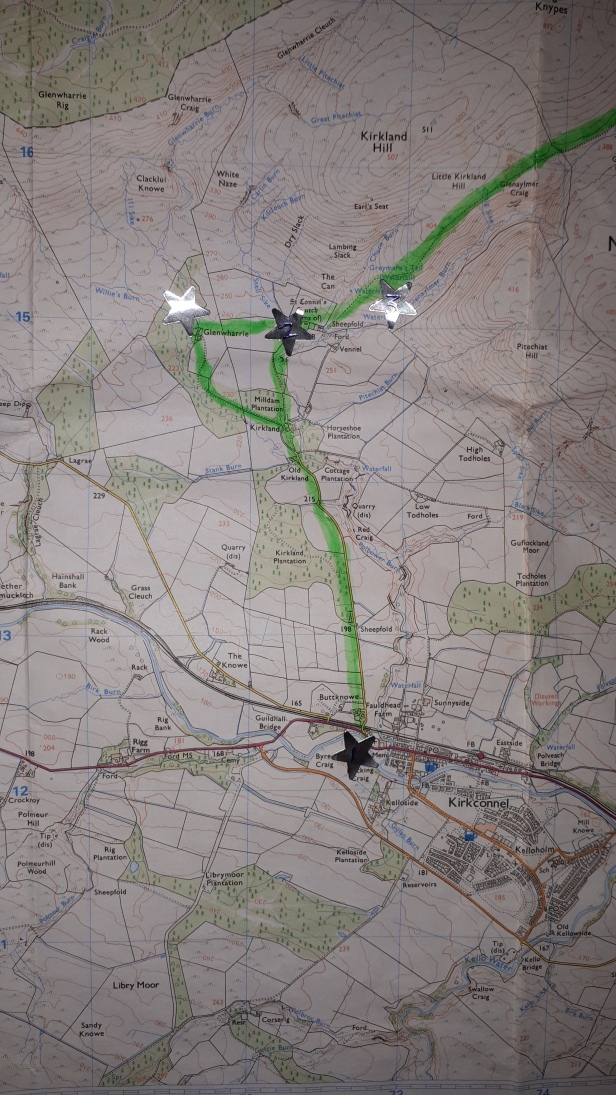 1 – The Curlew Trail begins at the Alexander Anderson memorial beside the church in Kirkconnel; an obvious and fitting place for a poetry trail of the area to set off from.  The first poem of this trail is ‘The Dying Covenanter‘, by Alexander Anderson himself.  It is a fairly lengthy piece of work, but it is the perfect poem to introduce the story of the Covenanters.

“For we fight against oppression,
For the weak against the strong,
For the right to God’s own freedom,
And against the wrong of wrong,
For our homes in glen and valley,
For a thing of grander worth,
The old worship of our fathers
In the kirk and by the hearth.”

2 – From here, continue up the road, turning right immediately after passing the Old School house (now a cattery).  Keep going up and up until you reach the signpost for Auld St Conal’s Kirk – one of the oldest church sites in Scotland (small detour past Glenwharrie cottage if you want).  Here we read ‘Sunsets’ by Cushie Knowe.  This poem has a much lighter tone than the first poem and is the first of three consecutive poems by this poet on the route.

Sprang from those hill folk;

For ere that freedom was procured,

What persecutions they endured.

3 – Cross the field towards Kirkland Hill and take a moment to rest beside Glen Aylmer and admire the stunning views over Kirkconnel.  Our next poem is ‘Shades Around Glen Aylmer’, by Cushie Knowe, written in 1971.  This is an important poem as it introduces us to one of the most important pieces of work of the whole route; ‘The Cameronian’s Dream’ by another local poet, James Hyslop.  As well as reflecting on the sights already covered on the route, it also name-checks hills, glens and moors which the route covers.

As seen from this old kirkyard stile.

From Corsencone I see them there

Yet, while they’re pleasing to the eye,

My thoughts around Glen Aylmer lie.

4 – After ascending Kirkland Hill, continue along the hilltops, before taking the right-hand path at Fingland and following the Kirkconnel to Wanlockhead path.  Stop as soon as you reach the memorial for Blaggannoch and here we read the poem ‘Written to commemorate the dedication of the Blaggannoch Covenanting Memorial‘ by Cushie Knowe.  Although this is the shortest poem of this route, it is an important piece of work as it introduces us to an integral character in the Covenanting story (James Renwick), as well as various other associated themes and terminology (‘declaration’ and ‘Killing Times’).  Blagganoch (or Blackgannoch) is one of my most favourite spots in all of Upper Nithsdale.

A place in history has for sure;

For Renwick here, in hillman’s plaid,

That famous declaration made. 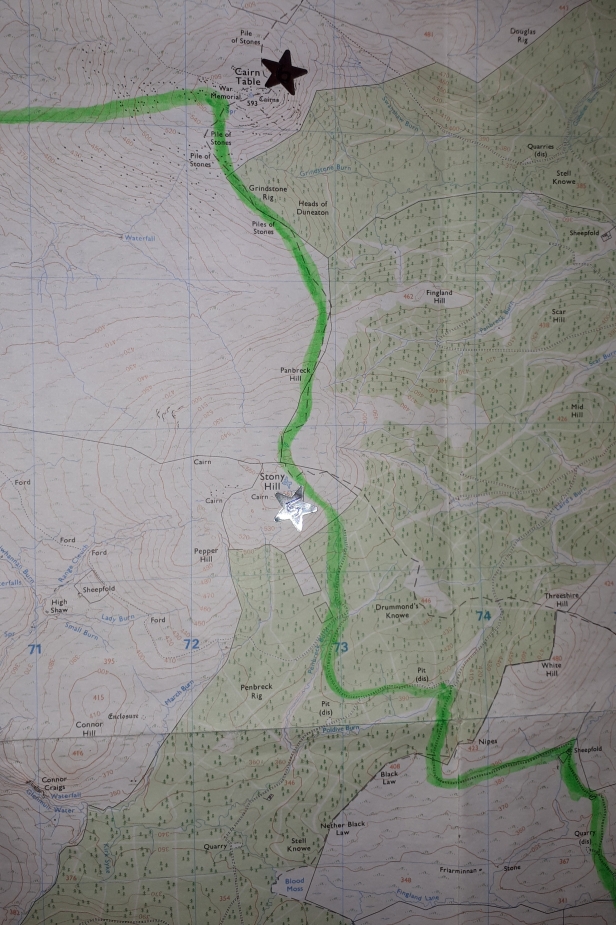 5 – From Blagganoch, retrace your steps back to Fingland (less then 10 minutes back on yourself) and this time take the left-hand path, signposted for Muirkirk.  Continue along this ancient drove road, up to the forest on Drummond’s Knowe, but deviate from the path and head up Stony Hill.  This is a long stretch, but one where you will be rewarded with stunning views when you reach the summit.  And here we read perhaps the most famous of all the poems about Covenanters; ‘The Cameronian’s Dream’ by James Hyslop.  From the vantage point of Stony Hill, in the distance you can see many of the locations referenced in the poem; places all included on this poetry trail, and although it goes on to depict the ‘streaming blood’ and the ‘rolling thunder’ of a battle ground, it begins by perfectly extolling the beauty of this landscape.

It was morning; and summer’s young sun, from the east.
Lay in loving repose on the green mountain’s breast.
On Wardlaw and Cairn-Table the clear shining dew
Glistened sheen ‘mong the heath-bells and mountain flowers blue.

6 – Continue north, across Panbreck Hill, skirting around the edge of the forest and head up to the trig point on Cairn Table.  Here we read one of my favourite of the 15 poems on this trail, ‘The Covenanter’s Lament’ by John Stuart Blackie.  This is a fairly short, but dramatic poem which introduces us to the character of ‘Clavers’ – the baddie in the Covenanter’s story.

O waly waly up the glen,

And waly waly o’er the moor!

The land is full of bloody men,

Who hunt to death the friendless poor!

We brook the rule of robbers wild:

They tear the son from his father’s lands,

They tear the mother from her child,

They tear the Bible from our hands! 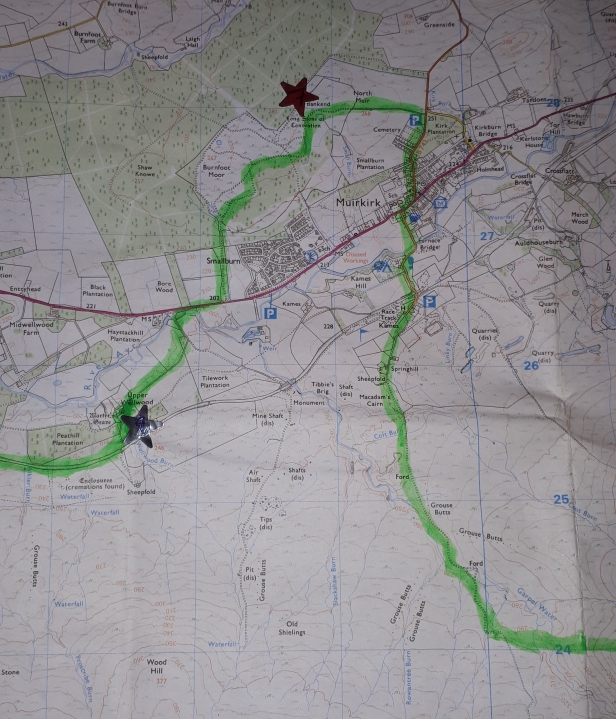 7 – From here head across the moor and join up with the old drove road leading to Muirkirk.  After covering around 15 miles, this is your half way point for this route so time for a well-deserved rest!  If you don’t fancy doing the whole route in one day, you can opt to stay over night in Muirkirk and spread the walk over 2 days, or just do the second half on another day altogether.

I’ll leave the next part of this trail and the rest of the poems a mystery for now as I work on finalising the other routes and finding some time to try them all out!  I can’t wait to share more of my plans…