My intention for today’s Monday Adventure was to cover as much of one of the Upper Nithsdale Poetry Trails as I could, in order to check whether the routes I have mapped out actually work, and to know how long they actually are.  Some of my workings-out with these routes so far have been approximations and educated guesses so I needed to cover some parts which I haven’t yet walked. 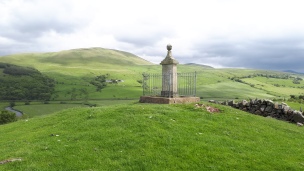 The Lapwing Trail begins at the Hair & Corson Monument, just across the road from the point where the Curlew Trail ends on Corsencon Hill.  The monument is the site for the first of the poems of this route, and is the first of three sites on this route where Covenanters are believed to have been killed and buried.  The six individuals involved in these three stories all feature on the Nithsdale Martyrs Cross in Dalgarnock graveyard.  I have written more about them here: https://thescottishdream.com/2019/05/03/part-3-the-nithsdale-martyrs/

I got my essential B&B jobs done early and set off from the monument at exactly 11.20 am, under a slightly threatening grey-blue sky.  One of the best things about being self-employed, and running a B&B in particular, is having the flexibility to choose to do 3 hours of ironing in the evenings, thus giving you extra daytime hours for fun!  I knew I’d have more stuff to sort out when I got home, but I had been itching to do some exploring for days so I didn’t want to waste any more time indoors. 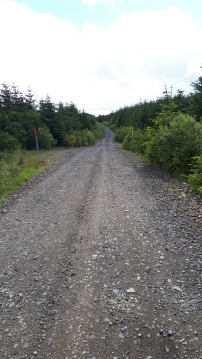 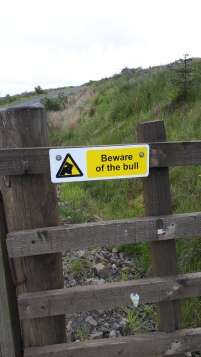 I followed the track, signposted for Hare Hill Wind Farm; two miles in it struck midday so I stopped by March Burn to let the dog have a drink and a little rest.  Louis the dog is only 11 months old and he’s still in training for longer adventures so I knew I couldn’t push him too hard – ten miles is the most I have done with him so far in one walk so I thought it best to stick to that for today.  But I do love my adventures with Louis – he is an absolute pleasure when we are out on the hills…just not so much when he’s at home eating all the butter and knocking the kitchen bin over a thousand times a day!

Just beside March Burn, leading off to the right I noticed a nice track which I hoped would provide a short cut and an alternative from walking on the purpose-built wind farm tracks – I don’t imagine that sort of surface is much fun for little dog paws.  Thankfully I was right and by 12.45 I had reached the first of the wind turbines on Hare Hill.

Oh my goodness.  There were more wind turbines than I could count.  Well, I’m sure I could have counted them but it was so freaking windy up there I couldn’t really focus on anything.  My contact lenses were jet blasted on my streaming eyes and I couldn’t see much at all – if I’d worn my glasses they probably would’ve blown away.  Having crappy eyes is quite a disadvantage when you are hill walking.  I used to live with a bit of a douchebag at uni who used to think it was funny to mock me for being short-sighted; he’d say things like: “Hey Alice, look over there”, and point to something in the distance and then say “Oh, sorry you can’t see that because you’ve got bad eyesight”, and then laugh like an absolute cretin.  It was as if I was the first person he’d ever met who wore glasses.  This person also referred to London as “Sexy London” so you get the general idea here.  Even my other half says that I ‘cheat at seeing’ by wearing glasses.

Anyway, the sight of the blanket of turbines was so immense that I realised I really needed to include a poem on this part of the route, ideally about the wind turbines themselves.  I was excited to research this on my return home, but so far I have only found really negative ones, or just really bad ones.  Maybe it might be an idea to have a pro-wind farm poem and an anti-wind farm poem to encourage a bit of debate on the whole topic? 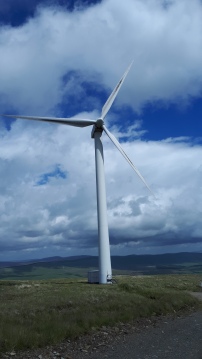 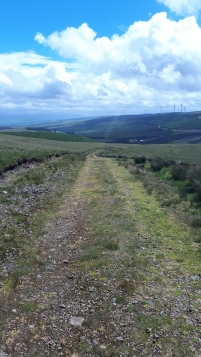 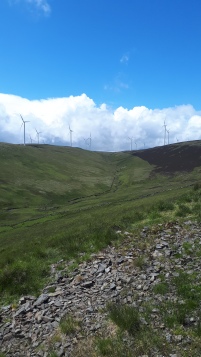 After crossing the second cattle grid at the wind farm, I hopped over the gate and took the grassy farm track immediately on the left which wound down Hillend Farm, but frustratingly I completely forgotten to look for a cairn marked as ‘McCrierick’s Cairn’ on the OS maps which was just opposite the second cattle grid.  But it was wonderful descending the hill on that picture-perfect track, with big hares bounding across in front of us and the sight of Polstatcher Burn glistening in the distance.  This burn is the site for the next poem of the Lapwing route.

It is truly wonderful that there is a poem written about this particular burn up in these hills, but I imagine it would have looked a whole lot different when Cushie Knowe wrote his poem simply titled, ‘Polstatcher‘.  In fact, although the first four verses of the poem sing of ‘Happy days‘, and paint the picture of hills of ‘emerald green’, skies of ‘azure blue‘ and waters with a ‘silver sheen‘, it it the last two verses which hint of the poet’s sadness and pessimism for the future of this place.  The poem isn’t dated but it was clearly written just before this part of the land was turned into a tree farm and Knowe worries that the ‘Fir trees towerin’ e’er sae high‘ would lead to ‘Shuttin’ oot the very sky‘.  I can’t begin to imagine what he would think if he were alive to see it today.

I’d covered exactly 5 miles by this point – although I added an extra half mile just trying to find the easiest place to cross the burn, which was surprisingly deep in places.  It’s usually pretty easy to cross these burns but I suppose the recent rainy days have added to the water levels.  Soon I was down at Hillend Farm and debated whether to turn right and continue up to Blackcraig Hill – at 700m this is quite a beast of a hill for this area and I’ve been wanting to do it for ages (although it’s not actually part of the Lapwing Trail).  But the sky in that direction looked rather unfriendly so Louis and I decided to leave that for another day. 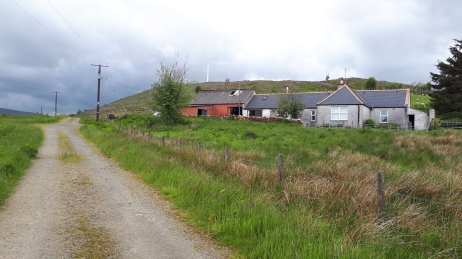 In the end we turned left, past the farmhouse and down towards the bridge over Kello Water.  If we were to continue on along the Lapwing Trail, we would take a right here, across the bridge and up into the forest.  But today we followed the track to the left, to the corner of Mynwhirr Hill and veered off the track, following the line of telegraph poles up the hill.  And there, at the summit of this wee hill, Louis got to sit on his first trig point.  At first he looked at me like I was about to perform a sacrificial ceremony, but he sill managed to strike a pose for me, ears flapping in the wind.

From here we simply headed down the hill and joined the familiar forestry track down Sandy Knowe and back towards Rigg House B&B.  I was glad to of plotted out another great 10 mile (nearly) circular route from the B&B which we could tell our guests about.  As I have written before; it is easily possible to spend a very happy week exploring the Nithsdale Hills with out getting in your car.  Simply choose a long trek for a hardcore adventure of wild camping and bothies, or take your time with a series of gentler day-long walks filled with interesting sights such as this one.

One thought on “A 10 Mile Adventure: A Covenanter Grave, Wind Turbines & A Trig Point”