Although I barely got a wink of proper sleep on my first night of my adventure, I think I did manage a couple of brief snatches of uncomfortable semi-consciousness, but always aware of the fact that I was a bit lost, camping on a boggy moorland.  Mercifully the morning brought with it a bright sunshine and a hazy sky which energised me enough to have everything packed up by 8.30.  I did manage to jam one of the clips on my backpack at this point which resulted in making everything a bit harder.  It was a real lesson in the fact that, on a solo-mission like this, one tiny thing like a broken backpack clip can have a knock-on effect on the rest of the journey. 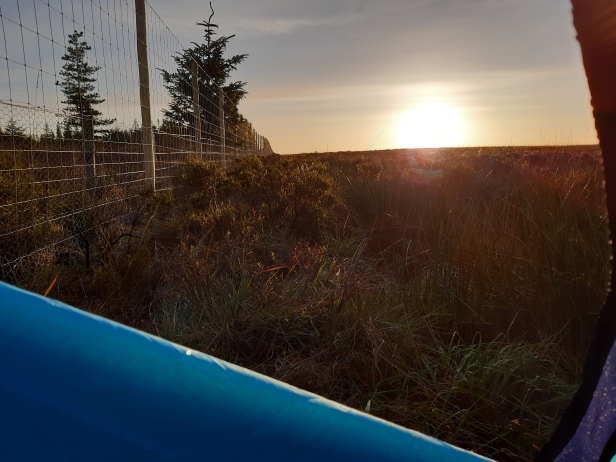 Anyway, to my delight (and continued frustration), the morning light revealed the fact that I was just minutes away from the forest that I had been aiming for last night.  Twenty minutes later I found a SUW post – one of my ‘yellow-topped friends’, which directed me into the trees.

Damnitdamnitdamnit.  If only I had carried on for a bit further last night!  I limped my way through the forest and just over an hour after packing up my tent I arrived at The Beehive Bothy, 13 hours after I had planned to find it.  The sun still shone, albeit a little weaker now but I thought I’d give myself a couple of hours at the Beehive to recharge after my awful previous night before continuing on to Bargrennan.  Some kind soul had left a virtually new-looking inflatable camping mattress in the bothy so I pulled out my 3 year-old son’s sleeping bag (don’t ask), wrapped myself up in a tarp sheet and quickly drifted off to sleep to the lullaby of the swooshing wind turbines.  I dreamed of a field filled with yellow-topped friends, having a full size sleeping bag, and of my family. 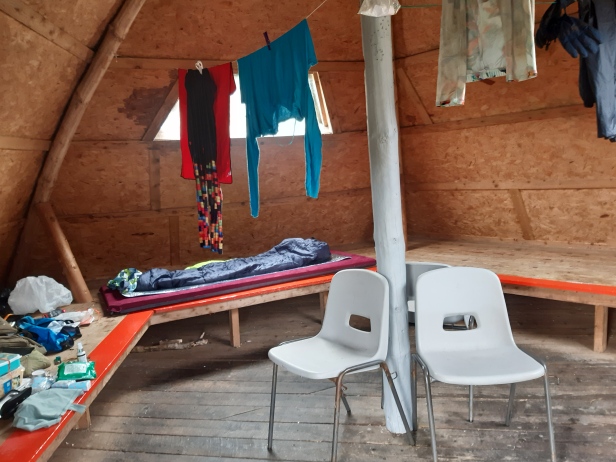 It was 3 pm when I awoke to the sound of hammering rain.  I pulled opened the door of the bothy and was instantly pushed back inside by a gust of wind.  I was going no where.  Over the next few hours the rain continued to pour and the wind continued to howl.  At one point I thought that the windows were going to shatter over me and I hoped constantly that this wooden yurt-like structure was water-tight.  I alternated my time between reading, eating, sewing, writing and sleeping, but mainly just wishing that the rain would cease so I could be on my way.  Having all that time wasn’t really good psychologically, especially when it reached 7 pm and I knew my little boy would be going to bed and I couldn’t say goodnight to him, and then later when it reached my daughter’s bedtime I wondered what the hell I was doing in a bothy so far away from them.  I had put myself in this ridiculous position by choice!

So, that is pretty much the extent of my Day 2 of my Southern Upland Way adventure.  I was cursing cows and cursing the rain for screwing up my plans so drastically, but also very thankful to be in the bothy and not outside in the storm.  I’m a big believer in everything happening for a reason; I knew I couldn’t do anything to change the situation by this point so I just accepted it for what it was.  Like the night before, it wasn’t perfect, but it could have been dramatically worse.

Despite everything, I’ll be forever grateful to the coziness of the Beehive, and to the stranger who left the inflatable mattress.  And mainly for the fact that no one killed me in a bothy in the middle of the forest.

One thought on “The Southern Upland Way: Day 2 – Taking Refuge in The Beehive”